Yeah, I know.  It is not Monday.  I am still going to link ever so late to Laura’s blog so every one can check out the other great menus.  We have been fighting some kind of cold around here.  We had leftovers, so we managed to survive.

The pork fried rice is from my friend Kate’s blog.  It has been torturing me in it’s deliciousness!  I had to make it!  Below is the recipe.  The italics are my comments.  It seems as if it is a bit fussy to make, but on Sunday when I made it, I was able to get each step done in between snuggling my little sicky.  The longest time is the marinading, and that happens all on its own.  When I put the pork in to marinate, I made the rice so it would have time to cool down. 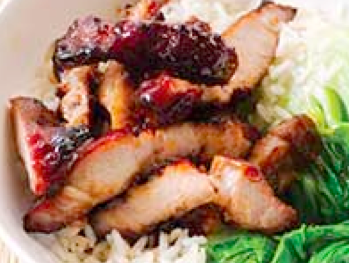 6 T. hoisin sauce (use a gluten free one, such as Dynasty from JFC International)

With a fork, prick each pork slice 10-12 times per side and place in large plastic zip-lock bag. Combine sugar, soy sauce, hoisin, sherry, pepper, 5-spice, sesame oil ginger and garlic in bowl, stir to combine. Reserve 1/2 cup of marinade, then pour remaining over meat. Press as much air out as possible, seal and chill for 30 minutes or up to 4 hours.

In a small saucepan, place reserve marinade, ketchup and honey and bring to a boil. Simmer over low heat about 10 minutes to thicken and reduce. Turn off heat.

Line a roasting pan (with rack) with tin foil, place rack in pan and spray with cooking spray. Pre heat oven to 350 and adjust rack to center position. With tongs, remove pork from marinade, allowing excess to drip off, and place on rack. Pour 1/3 cup water into bottom of pan and cover tightly with tin foil. Cook for 25 minutes. Remove foil, and cook until pork has browned slightly around the edges, anywhere from 35-45 minutes. Turn broiler on, and broil pork until evenly caramelized, about 5-8 minutes depending on your oven. Be careful to not blacken the meat- you are looking for a nice even brown. (a drawer broiler will not work for this, the heat source is too close to the meat, says the mag. Increase heat to 500 degrees to caramelize) Turn meat over and caramelize other side. Then brush half the marinade on meat and allow to caramelize again for about 3-5 minutes, again, watching to prevent scorching. Turn meat with tongs, brush remaining glaze on other side and caramelize other side. Allow to cool for 10 minutes, then slice thin. 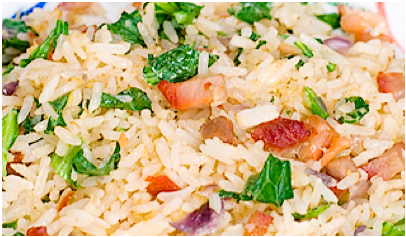 In a small bowl, stir the soy sauce with the rice vinegar, sesame oil and sugar.

Heat a very large skillet. Add the shortening and let melt. Add the diced pork and stir-fry over high heat for 1 minute. Add the peas, shiitakes, carrot and bok choy and stir-fry until tender. Add the eggs and scramble just until set.

Stir in the cooked rice, scallions, soy sauce mixture and pepper and stir-fry until the rice is hot. Remove from the heat and season with salt. Spoon the fried rice into bowls, top with the sliced pork and pickled ginger and serve.

Hope everyone gets healthy soon,

Pancakes for dinner…I used to LOVE when my mom did this.  HMMMM..I might have to do this soon.

I hope we’ll see you tomorrow!