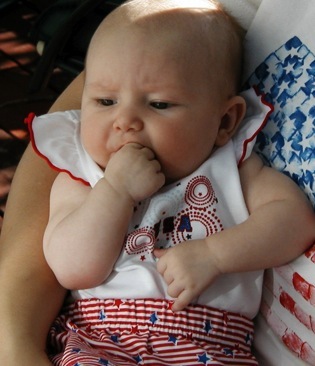 Above is a picture of my littlest sweetie.  Today was her very last day of preschool.  No more preschool events for me…  I just needed to look at her cute little baby face.

For Slow Cooking Thursday today, I made Caramelized onions, which doesn’t really need a recipe.  (Peel and slice the onions, toss in a bit of oil, cover and cook for a really long time.)  Sandra is off home to South Africa for four weeks, so there is not any Slow Cooking Thursday for the week to link to, but I just had to do it any way!

Right now Vidalia onions are in season, those sweet onions that are only available for such a short while.  Last year for my birthday, my father-in-law gave me a pressure canner so that I could expand what I can put by.  One of the first things I canned were caramelized onions following the guidelines on canningusa.com.  So, of course, if I want some of these tasty onions this summer (amazing on burgers, portabella mushroom “steaks”, fajitas, chicken, pizza, etc.) then I need to can some now while the price is right.

It did take me quite a while to cook the onions down last year, so I wanted to try to speed up that process, or at least not have to be so involved.  I found some recipes for caramelized onions on the ‘net using a slow cooker, so I thought I would give it a shot using the proportions on the canningusa website.  The link to the recipe is not up right now, but I emailed them, and they sent out the recipe right away.  If you can at all, or are just interested in the process, you should really go check out their site.  They have 5 video podcasts so you can actually SEE canning being done., instead of just trying to figure it out from a recipe.  Really interesting.

If you don’t can, cool your onions, then freeze in portions you will use.  For example, maybe one cup portions for burger toppings.

I used my 6 quart crock pot, and for each pound of onion I added 2 tablespoons olive oil and light sprinkling of salt.  Peel each onion, cut in half , then cut ¼”-1/2” strips,  putting in the crock pot as you go.  I filled the crock to the top, put the lid on and put it on high for 2 hours.  At that point the onions had cooked down enough to add the rest of the onions to the pot.  Stir to mix, cover and lower the heat to low.  Leave on for 10 or more hours until the onions are caramelized.  There will also be quite a bit of juice released.  Strain your onions and save the onion broth in another bowl.  You can freeze or can the broth at the same time as the onions.  It is nice as a soup base or in the crock pot used as the liquid for a roast.

I got 13 half-pints of caramelized onions and 10 half-pints onion broth from my 6 quart crock pot.  Plus I had enough onions to have with tonight’s roast.  Not bad for not having to stand over a stove…

Each pound of onions make ½ pint of caramelized onions.  When canning, add ½ teaspoon ascorbic acid per each ½ pint.  Can using hot pack method leaving1/2” headspace in the jars.  Process in a pressure canner for 70 minutes at 10 pounds pressure.  For elevations above 1,000 feet, see the altitude time adjustments on canningusa.com.

***If you do not freeze these, caramelized onions MUST be PRESSURE canned.  You cannot can these safely in a hot water bath.  Onions are not acidic enough to can safely without a pressure canner.

Thursday, May 22, 2008 – 10:18 PM
kate
I love that photo of the little munchkin…..she is as adorable as a babe as she is at five.So quickly they go from those tiny gnawing creatures to our huge hairy and deep voiced kids (well, mine is like that anyway!)*sigh* it’s just not fair.

And I love that you canned caramelized onions!! You are SO cool!