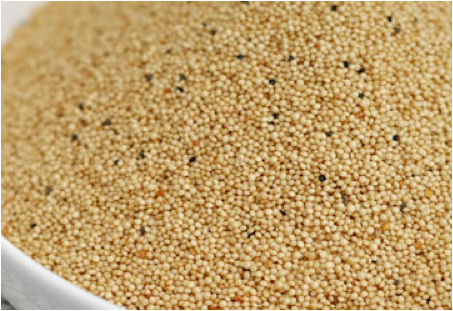 I think when gluten or another food item is removed from our diet, we can have a tendency to focus on what we can’t have.  I would rather focus on what new and delicious items we can have.  There are so many wonderful gluten free whole grains for us to enjoy.  But as they can be unfamiliar, let’s explore one or two of them each month.  Today let’s talk about amaranth!

Amaranth has been cultivated as a grain for 8,000 years.  It was a staple food of the Aztecs and was used as an integral part of Aztec religious ceremonies.  So much so that the conquistadores banned the cultivation of amaranth upon their conquest of the Aztec peoples.  As amaranth has largely grown as a weed since that time, its genetic base has largely maintained due to naturally occurring open pollination. Amaranth grain cultivation began in the 1970’s and it began to show up in health food stores at that time.

Amaranth is related to pigweed (pigweed is itself a wild amaranth species) and does not contain gluten which is a boon for us gluten free folks.  Amaranth really shines in its growing habits, growing in light solid and being able to produce grain under harsh and poor nutrient soil conditions that would not sustain other food crops.

Amaranth is rich in protein and calcium.  You can find the nutritional profile of amaranth here.

There are a wide variety of ways to enjoy amaranth, the most popular being boiling; however toasting is also common in some parts of the world.  If you would like to try amaranth in a favorite recipe, it works well to replace millet, quinoa or buckwheat groats.

Toasting: Heat amaranth in a heavy, dry skillet over medium heat until the seeds begin to pop. Serve with your favorite milk substitute and fresh blueberries as a healthy breakfast, or mix with a touch of honey for a sweet snack.

I use amaranth in my family’s favorite gluten free pizza crust, and in the flour blend for Gluten Free Sesame Sandwich Bread.  I also like to cook a batch of amaranth on the weekends, then cool and store in the fridge.  I can then quickly make a tasty amaranth porridge by reheating in a sauce pan with a bit more water or almond or coconut milk, cinnamon and raisins or chopped dates for breakfast.

Brown pork cubes in skillet over medium-high heat.  Put into a 4 quart crock pot with rest of ingredients except corn, beans, and amaranth.  Put on lid.  Cook on high for 1 hour.  Change to low for 4-5 hours or until veggies are tender.

Add corn, beans and amaranth.  Stir.  Cook on low for half hour more or until heated through.

Serve with tortilla chips and guacamole, if desired.