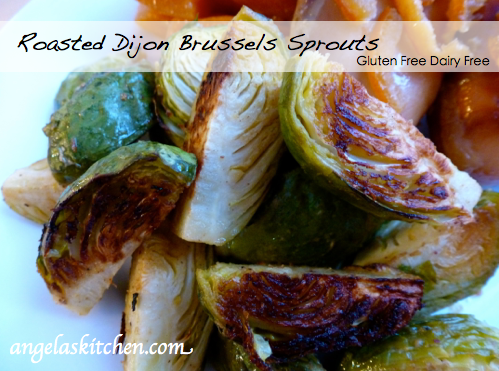 My assigned blog this month was Julie of a Little Bit of Everything.  Julie’s blog is a journal of her creative journey through her cookbook collection, her recipe clippings, newly found recipes and the many baking groups she participates in.  She has a great list of her “50” – the list of 50 things she has not made before but would like to.  What a great idea!  After going through her blog, I decided to make the Roasted Brussels Sprout with Walnuts, Dijon and Crisp Crumbs, but without the crumbs.  I will definitely make these sometime WITH the crumbs (gluten free ones for us, of course), but as my hubby is a bit low-carb/anti sugar right now, I skipped it this time so he could enjoy them.  Brussels Sprouts are one of his favorite things, so I have been looking for a new way to cook them up.

Roasted Dijion Brussels Sprouts were delicious and so easy to make!  These will be on our table again.  Fancy enough for company, yet easy-peasy for the host.  I liked the way the mustard caramelized a bit during the roasting process.  Yum!  Thanks for a great recipe, Julie!

Position rack in the center of the oven and heat the oven to 400°F. Line a rimmed baking sheet with parchment.

In a large bowl, whisk 1/4 cup of the olive oil with the mustard, Worcestershire sauce, caraway seeds, 1/2 tsp. of the salt, and about 15 grinds of pepper. Add Brussels sprouts, tossing to thoroughly distribute the mustard mixture. Spread the sprouts in an even layer on the baking sheet.

Roast until the cores of the sprouts are just barely tender and the leaves are browning and crisping a bit, 20 to 25 minutes (if your oven heat is uneven, rotate the pan midway through cooking).

Sprinkle the toasted walnuts, if using, over the sprouts just before serving. 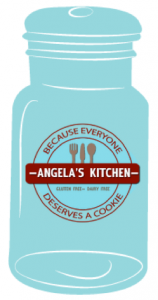 This is so easy, anyone can make this simple fermented food.  It is a great starting point if you are ready to learn to ferment your own veggies.  My kimchi recipe is based several recipes on the internet, and is not as hot as traditional kimchi.  I like to have more specific amounts to my recipes for a more consistant finished product, and I don’t use whey as we are a dairy free family.  Honestly, this is a very Americanized version, but it is very delicious.  Try it!  We like this with our morning eggs, in a meat sandwich instead of a pickle, as a condiment to ribs or stir fry, etc.

3 cups shredded cabbage (I like Napa cabbage for this)

salt and pepper, to taste

Quarter apples and remove core.  Slice apple into slices not thicker than ¼ inches thick.  Cut each slice into long slices (creating “match sticks”).  Put cabbage, apple sticks, and green onion slices into a bowl and toss.  Season with salt and pepper to taste.  Mix mayonnaise and brown sugar in a small bowl, pour over apple cabbage mixture and toss to mix.

I have taken this to several potluck BBQ’s.  It is a little different than the usually salad and everyone always seems to love it.  I usually put the dressing on when I arrive and toss the salad right before serving.  It pulls together really fast and is super tasty.  That works for me!

In a small bowl, whisk together garlic, zest and juice of lime, vinegar, soy sauce, and chili oil. Season with salt; set aside.

In a medium bowl, toss together cabbage, pepper slices, scallions, radish, snow peas, and chives. Pour dressing over the slaw, toss to combine, and serve. 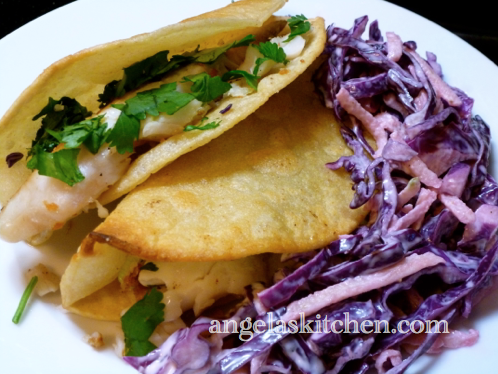 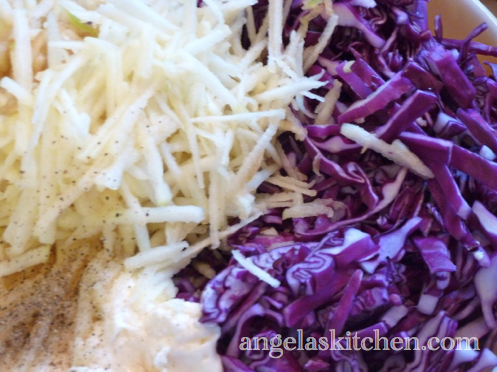 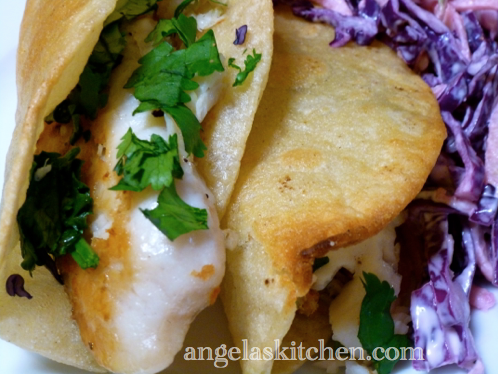 Wednesday, October 31, 2007 – 10:13 AM
gingerlemon_girl@yahoo.com
that looks REALLY good! I’ve never had fish tacos, but I’ve always wanted to try them! I’ll have to give these a shot!! Great picture!

Can’t wait to have this tasty dish this week!